Home Humour The King of Thailand is Reportedly Isolating in Bavaria with a Harem... 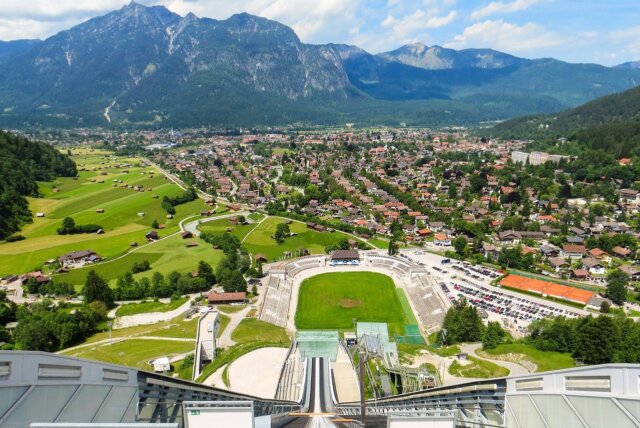 If the global hysteria over Netflix documentary Tiger King has shown us anything, it’s that eccentric “king” figures are all the rage right now…

And while we at Bored in Munich are firmly #TeamLudwigII for life, another king has recently caught our eye for the wildest reasons – nope, not the king of tigers, but the king of Thai……… land.

Mmhmm! In case you’ve missed the memo, the King of Thailand, Maha Vajiralongkorn, also known as King Rama X, has reportedly been quarantining in a luxury hotel in Garmisch-Partenkirchen for several weeks… despite Thailand being in a state of emergency, with some hotspots even under full lockdown.

… And well, since we’re stuck inside with not a ton to do, we went down a pretty wild rabbit hole reading all about the king’s isolation and ties with Bavaria. If you’re new to this information and are looking for a little escape from dreary news and stats, buckle up for a wild ride of facts that will make you go “…… really?”

Here are 7 things to know about King Rama X and his quarantine situation in Bavaria:

1. King Rama X is said to be staying at the Grand Hotel Sonnenbichl in Garmisch-Partenkirchen

First – the facts. We should clarify that no official sources (i.e. spokespeople) have confirmed that King Rama X is actually staying at the hotel or who he’s staying with. What we do know for sure though (thanks to this statement from a spokesperson) is that the Grand Hotel Sonnenbichl in Garmisch-Partenkirchen has been granted a special permit to operate while other hotels have closed. This exceptional permit was given since the king’s entourage is a “single, homogenous group” (……. that is swimming in billions of dollars, but we’re sure that’s irrelevant).

Despite widespread media coverage though, whether the king is actually there isn’t officially confirmed, although the spokesperson stated that he assumes so given the presence of black limos on the property.

As for the digs? They do seem pretty luxurious (compared to our tiny Munich apartment ohne Balkon, anyway). The Grand Hotel Sonnenbichl is a 4 star property with an on-site restaurant, bar, sauna, and pretty swanky-looking pool to boot. Its main selling point though might be their views of Zugspitze, Germany’s highest peak.

2. He’s no stranger to Bavaria though… he also has owns a luxurious villa by Lake Starnberg

Yes, Starnberg! That lake you (and the rest of Munich) flock to as a soon as there’s sunshine and it’s socially acceptable to drink outside again! That one.

If you were confused about why he chose Garmisch-Partenkirchen of all places to self-isolate (we certainly were), you should know that the king’s love affair with Bavaria goes a lot deeper than just this one social iso-holiday. Over the years, Rama X has been spotted many times around Zugspitze and the Alps (more on this later). He even reportedly purchased the luxurious Villa Stolberg, located at Lake Starnberg back in 2016….

3. Rama X is allegedly “quarantined” with a harem of 20 women

While we’re struggling to find confirmed sources for this info, multiple media sources and tabloids (like here and here) have repeatedly referenced the fact that the king is isolated with his entourage, which includes a harem of 20 women. While again, this is all hearsay, it is pretty consistent with the king’s rep.

We mainly wanted to include this fact so we can crowbar in our new favourite German compound word we learned: “Haremsdamen”.

3. Apparently, he just flew 10,000+ miles roundtrip to attend a party back home?

Some reports like here, here, and here are claiming that King Rama X literally popped back into Thailand for a few hours this past weekend to attend Chakra Day celebrations before flying back to the safety of his hotel and harem.

4. The hotel is (understandably) drowning in backlash

Okay, now back to the Grand Hotel Sonnenbichl…

As you can imagine, there are many (many, many) people who aren’t thrilled with this “exceptional permit” while Bavaria remains limited by strict lockdown rules… and the hotel itself is getting plenty of heat for it.

According to evidence on Facebook here, they even had to shut down their Facebook page after it was flooded with angry 1-star reviews (although an old page from 2012 still exists… so we shamelessly mined it for photos!).

A quick look at the hotel’s (very inactive) Instagram as well shows a slew of disgruntled comments on the most “recent” posts, “recent” being placed in air quotes since they haven’t been active since January 2019…… but that’s still not stopping anybody from speaking their mind!

5. The hotel was also once used as a Nazi hospital?

Besides an eerily empty social media presence, the Grand Hotel Sonnenblichl also has some pretty weird fun facts on their website, like for instance that they used to be a hospital for Nazis. Genuinely, they even write this on their actual official website, which is honestly not something we would be advertising, but hey what do we know?

6. The King has a penchant for crop tops… and has been photographed at Zugspitze in a sports bra?

We don’t have words for this… and don’t feel like it requires any explanation. Rama X likes wearing crop tops. Here is him in one while waiting for the gondola at Zugspitze.

And here is a story all about a viral video that circulated of him walking around a Munich shopping mall in a yellow crop top and (presumably) fake tattoos. Fun fact: he genuinely tried to sue Facebook over these photos.

… Aaaand for good measure here’s another fun crop top while shopping in a Segmüller.

BONUS fun fact: King Rama X once made his poodle an Air Chief Marshal in the Royal Thai Air Force

This is unrelated to the quarantine info, but….. yes. His name was Fufu. And he wore fancy clothes to galas. Here’s a pic.

20 Anti-Racism Protests Planned for Saturday Across Germany. Here’s How to Participate in Munich

Münchner Christkindlmarkt to Take Place As Scheduled in 2020: Here are...

6 Autumn Activities in Munich to Enjoy with Kids

Where to Find the Best Coffee in Munich (According to a...