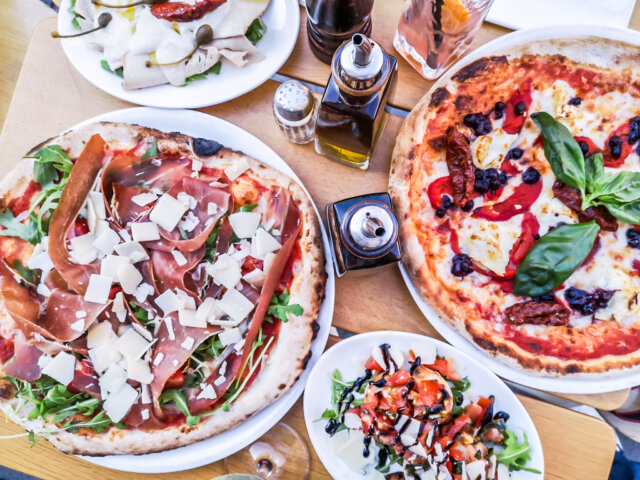 [WERBUNG/AD – Gifted Experience] Welcome to Foodie Friday! Today’s Riva Bar Pizzeria Tal review is part of a special weekly feature from @whatandieeats, featuring a new restaurant recommendation every week. For more tasty food photos, be sure to follow her on Instagram.

Happy Friday my hungry Munich Foodies! For this week’s Foodie Friday, we are having dinner on the busy bustling street of Tal which runs through Isartor in the heart of Munich. This sometimes overlooked pizzeria is literal heaven when it comes to pizza. Get your calendar ready because by the end of this you’ll be ready to reserve your next dinner date!

Riva is a small restaurant just past Isartor walking in the direction of Marienplatz, with a wide array seating both outside and inside.

Especially noteworthy is the cozy window seat right by the bar where you can just order cocktails and have a nice chill evening.

What’s funny about this place is that I didn’t think I had ever been there but after going inside, my fiancé and I realized that we had indeed been there before on a rather indulgent Munich night pre-COVID. We immediately remembered this place and could recognize that delicious pizza.

Now I can tell you, that night a few years ago, it was the best pizza of my life but at the time I would blame it on the ah-ah-ah-alcohol. But I’m here to tell you, today sober, the pizza they are serving up at Riva is literally to die for. Let’s get started, shall we?

What We Ate: Starters

To start we had some very basic Italian restaurant favorites, Vitello Tonnato and Bruschetta. Now, I’m not the biggest fan of Vitello Tonnato, I’ve had it at a few different places and it just never excited me, but my fiancé is a fan.

I must admit when I decided to give this appetizer another shot I thought I would get the same experience but actually I was quite impressed with how this restaurant made it. It wasn’t too tuna-y which I think is my problem with the dish and the veal was also really nice. Overall I was quite happy that I gave that another chance.

I also learned something about myself: I love those giant capers! I don’t think I really ever appreciated them but they were served with this dish and for that, Riva, I thank you!

Then of course the bruschetta was amazing. All the right amount of everything and it was overflowing on my bread.

Now, I don’t know about you but I love it when the bruschetta is piled up so high that when you take a bite it touches your nose. Especially when it tastes as good as it did at Riva and of course not to mention it’s topped with large shavings of parmesan cheese which, for me, is super important because I am all about that cheese life.

Just a disclaimer, the image doesn’t do it justice.

Let’s get down the nitty-gritty, the main reason we’re all here: THE PIZZA. Riva’s website says it serves “classic Italian cuisine combined with innovative creations,” and this is exactly what you’ll find here.

There are so many pizzas to choose from and if you’re lucky you can also order PINSA ROMANA, which (according to their site here) “is an almost forgotten original form of pizza from ancient Rome” where the dough is kneaded with “wheat, rice and soy flour before letting it rise gently for up to 72 hours”, creating an aromatic and light result. Unfortunately, we weren’t lucky because they were all out of this special dough when we got there.

However, the nice part is that you can still order the toppings from the Pinsa menu but just on the regular dough. We tried two of their pizzas, Parma e Rucola and of course because I love cheese I ordered the Creamy Goat Cheese from the Pinsa menu.

The Parma e Rucola was a challenge, this pizza was loaded with toppings: tomatoes, mozzarella, Parma ham, Grana Padano & arugula (or rocket for you non-Americans). Keeping it all on one slice wasn’t easy but it definitely made eating it so much more fun.

The Parma ham was really thick which for me personally I really enjoyed. The saltiness from the ham combined with the sweetness of the tomatoes was everything you could want in a fully loaded pizza. The rucola was fresh and crisp and the dough was crunchy and thick, which of course you would expect because the pizzas here are baked in a brick oven, making them even more authentic and delicious.

We did notice that the sauce on this pizza was rather light but actually it wasn’t something that we really missed because everything on top of the pizza made up for the lack of sauce.

And now the Creamy Goat Cheese pizza. Y’all this pizza was crazy good!

There were so many flavors bouncing all over the place from the goats’ cheese and roasted bell peppers, all the way to the blueberries and sundried tomatoes.

The best thing about this pizza is how well all these elements went with each other. It’s honestly something I would have never thought to combine. The flavors didn’t blend together as one, but each chew had its own separate taste depending on which of the four ingredients prevailed over the surface of each bite, and it was absolutely immaculate.

If there is one piece of advice I can give you as an amateur food blogger and cook is to experiment with different flavors just as Riva has with pizza. Put the tangy with the sweet and the cheesy with the acidic. Do it and you won’t be disappointed!

Truth be told, we both asked each other, “do we still get dessert?” As we have mentioned, the toppings on several dishes we tried really were not so modest.

However, we decided to power through, for you, our loyal readers of Bored In Munich. The two desserts we tried were a writers-favorite Panna Cotta and the Profiterol.

The Panna Cotta was one to remember. The thickened cream had a thicker consistency than its counterparts in previous articles. We felt the slice of the spoon going through it, which seemed to add to its flavor when dissolving on our tongues. The homemade strawberry sauce was also a treat, tasting so fresh, which made the combination unforgettable.

The Profiterol was served as a small ball with powdered chocolate. Little did we know, this ball was as heavenly as it was light.

Thankfully we took pictures as soon as it arrived, as it magically vanished from the plate soon thereafter. We can best describe it as a chocolate eclair ball that was light but definitely quenched my craving for chocolate.

“I took my dessert for granted,” were words that came out my mouth, a few minutes after finishing it, nearly wishing for a second ball to appear. We were happy that we decided to go the extra mile, to try these delicious dessert dishes.

As mentioned at the start of this piece, this centrally located restaurant is also a good location for a nightcap. Currently closing at 11 pm, we must also talk about the cocktails that we had. We tried the Marito Spritz, Amalfi Spritz, Hugo and their homemade Lemonade.

Being a lime lover, the Marito Spritz was for me. Marito, tonic water, lime and basil; was a refreshing mix to lead me into the dinner. It’s Italian named Amalfi Spritz relative was a strong drink, obviously on the bitter side with Aperol, but a nice pre-dinner drink.

We refilled with a classic Hugo and homemade lemonade during our meal.

The Hugo had just the right amount of elderflower to sweeten our palates heading into dessert.

The homemade lemonade (non-alcoholic) is a must-try, as it reminded me of the American style lemonades that you could buy on the street for people trying to raise money. It was sour but sweet, a thirst quencher with a whole lot of lemony vitamins.

I would say that overall this place is good for a few things: date night in the city, drinks with friends or a place to have coffee and dessert if you’re looking to rest from a long day of shopping or sight-seeing.

And if you’re a bit of creep like me, this is also a really great place to people and dog watch. In all, I saw about 8 dogs pass by! So I would say that was the cherry on top of an already amazing sundae.

What I also love about this place is that it is very budget-friendly, so you can enjoy all the wonders of the menu without breaking the bank! The staff was also really helpful and responsive, despite being so busy which is always nice to see in a small business!

Anyways, I hope y’all enjoyed this week’s Foodie Friday! We’ll meet you back here next week!

For more information about the Riva, visit their website!

Where to Find the Best Coffee in Munich (According to a Coffee Snob!)

Tou Much Greek Food in Laim: A Tou Bakali Review