Home Foodie Friday A Taste of the Orient in Munich: A Das Maria Review 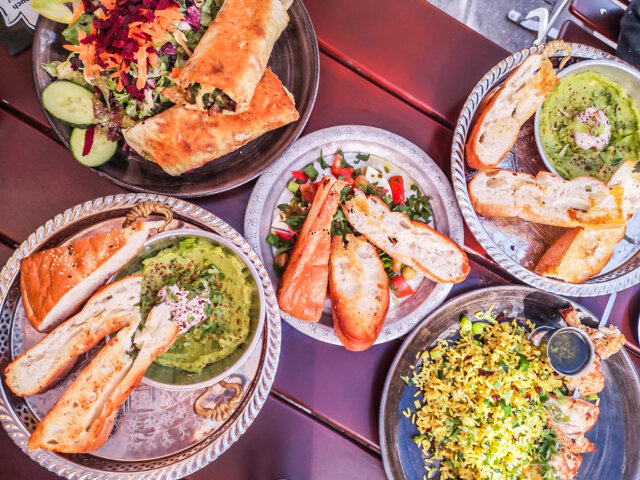 Welcome to Foodie Friday! This is a special weekly feature from @whatandieeats, featuring a new restaurant recommendation every week. For more tasty food photos, be sure to follow her on Instagram.

It’s that time again for Foodie Friday! Welcome back to our weekly blog where we share some of our experiences dining at local restaurants around Munich.

Today we try a new cuisine at Das Maria, a restaurant near the Isar in Ludwigsvorstadt-Isarvorstadt serving dishes inspired by the Orient.

I had been stalking Das Maria’s Instagram for quite some time after a friend of mine said she wanted to go.

And while they were closed up until July due to renovations during lockdown, I was excited to try it as soon as it opened again.

Now, as I said before in a previous blog post I want to make sure you guys know that I’m honest with my reviews, and that I want you guys to trust me.

With that being said, my experience at Das Maria wasn’t what I was hoping for.

Don’t get me wrong – the food was good, but it wasn’t as spectacular as I was hoping… although that could have just been me building up the hype.

Still, I think you should try the restaurant for yourself before you make your final decision on it. For your reference though, you’ll find my honest Das Maria review below.

What We Ate: Starters

We tried two of the starters from the menu.

The first one was Maria’s Yumma Ghanoush which was seasoned avocado mus with Sumaq, Pul Biber and lemon cream tahini served with large slices of toasted bread.

This dish was pretty good. The avocado was fresh and the seasoning was fair. While it didn’t exactly wow me, it was decently portioned, filling, and a nice healthy alternative if that’s the route you want to go.

The second starter we had was Maria’s Shanklish which had seasoned sheep’s cheese, tomatoes, olives and Chermoula, a marinade and relish used in Algerian, Libyan, Moroccan and Tunisian cooking.

The main ingredient here was cumin which I am a huge fan of, so I had a bit more excitement about this dish.

What I liked most was how light and refreshing it was. The cheese was crumbly and the seasoning was perfect. I would definitely recommend this as a snack or a starter as I wouldn’t say I felt full after eating it, which is perfect if you’re planning on ordering more.

I also really loved this bread. It was crunchy and fluffy and I’m pretty sure it had butter on it… which of course, anything with butter is amazing.

We then moved on to our main dishes, Maria’s Egyptian Shwarma and Maria’s Afghan coriander chicken.

I was particularly excited about the shawarma as I used to love this dish when I was in college and I hadn’t been able to find it since.

To my surprise, it was a different shwarma than I had in college, which is fine because this dish at Das Maria was super delicious and extremely filling.

I actually had to take it home and eat the rest later because it was such a generous portion.

The flavor was so different from anything I had tried before, including the college shwarma I knew and loved.

It also came with a side salad, which was a perfect pairing since the shwarma is a bit on the heavy side. If you don’t eat a lot, I would suggest you share this dish as it already comes split in half.

Otherwise, you can do as I did and take the rest home for later.

The second main course we had was Maria’s Afghan coriander chicken and this dish was fair I would say.

The chicken was marinated in a Koriander-Chili-Yogurt accompanied by spinach and Tumeric rice.

I really liked the chicken in this dish. The marinade was pretty on point but the rice was a bit dry. Maybe that’s just rice – it can be that way sometimes, but that doesn’t take away from how delightfully tasty I thought it was.

This dish is a little on the small side, however I think it would be perfect for just one person.

When we visited, it was a very beautiful day so we sat outside on the terrace.

They have a large area outside you can sit at. During our visit, this area was swarmed with wasps, so it was a very difficult way to eat.

We asked to move but because of corona rules, they weren’t allowing guests to switch tables, so we had to deal with the swarm of wasps that were trying to steal our food. I also need to mention here that they only accept cash.

I did take a step inside to use the bathroom and I was so impressed with how they decorated the place. It was as if I had taken a step inside a portal that transported me to the Orient.

Overall I would say this place was nice. I’m not sure it’s on my list of places to go back anytime soon, but I do recommend trying it at least once.

They have a lot of traditional dishes to try and a good selection of drinks. We were very boring with our drinks and just got Schorles and coffee, but if you fancy something a bit more intricate, they can set you up nicely.

During corona times it’s always best to make a reservation which you can do by phone of my email. To find out more about the restaurant and to see their menu you can visit their website.

Where to Find the Best Coffee in Munich (According to a Coffee Snob!)

Tou Much Greek Food in Laim: A Tou Bakali Review