Home Events Where to Watch the Schäfflertanz in Munich, a Tradition That Happens Every...
*FYI - this post may affiliate links, which means we earn a commission (at no extra cost to you) if you purchase from them. For the full scoop on what this means, feel free to check out our Privacy Policy and Disclosure.

Beautiful bored people of Munich, did you know: here in Munich, there’s a special traditional performance that’s so rare, it happens less frequently than the Olympics…?

So, who’s ready for the comeback of the Schäfflertanz!?

While you may have never heard of the Schäfflertanz by name, odds are you’ve actually witnessed it before – yup, this traditional dance is actually featured in the Glockenspiel show at the Munich Neues Rathaus. Crazy stuff huh?

Long story, short, the Schäfflertanz is a traditional guild dance of the Schäffler, craftsmen who created wooden vessels like barrels. Legend has it, the dance dates back to 1517 when the plague had wiped out a huge portion of Munich’s population and they wanted a way to boost morale among survivors… so they decided to cheer people up through doing this dance. As in “hey Ludwig, sorry everyone you love got wiped out by plague, but would you like to watch me jig?”

Yes, they really believed in the healing power of dance apparently…

Anyways, the dance is now performed every 7 years by guys in a variety of professions. Once upon a time, it was a Schäfflers-only shindig, but the number of Schäfflers available began dwindling too much to make a full squad. We don’t want to spoil things too much, but the performance starts and ends with a traditional march, and a lot of fun formations in between.

If you’re not yet sold, the Schäfflers perform in some pretty badass outfits too: green caps, red jackets, black pants and wonderful white knee socks.

Where to Watch the Schäfflertanz This Month

So, this year, lucky us, the Schäffler will be dancing all around Munich throughout the month leading up to Shrove Tuesday, which is on March 5, 2019. Here’s where and when you can catch this spectacle for yourself.

Germany May Be Lifting Travel Ban to 31 Countries (as Early...

Secrets of the Maximilianeum & Those Who Live in It: Elite...

Face Masks in Munich: Where to Buy Them, What’s Mandatory &... 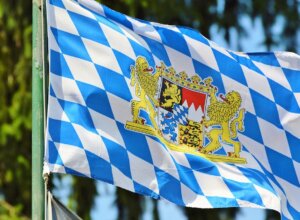