If you’re itching for a weekend getaway that transports you to a whole other world, why not Czech out Prague? (heh) After all, it’s one of those European bucket list cities that everyone says is a must, and hey, after a few trips there ourselves, we can confirm that it’s a gorgeous must-see (even though it’s hardly a secret among tourists).

Why Take a Trip from Munich to Prague?

Prague is a gorgeous city, with beautiful architecture and cheap ass beer. Like, if you thought Munich beer was cheap, go to Prague – you’ll be swimming in it for pennies. The bonus is that the food is hearty and cheap too, so it’s a budget-friendly getaway that will make you feel like you’re also getting a good dose of culture at the same time 😉 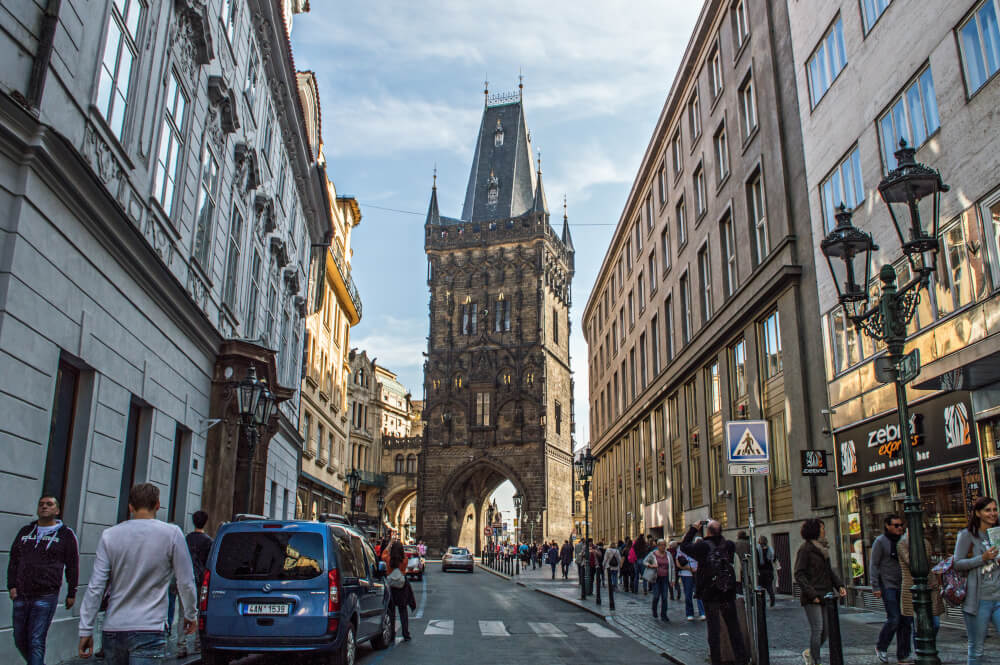 How to Get from Munich to Prague

To find the cheapest and fastest options, we always use Omio. It’s a free search engine that lets you compare and book transport options from Point A to Point B, and you can sort it by price, duration, departure time, etc.

The cheapest way to get to Prague by far is to take the bus. Flixbus offers multiple departures per day, with fares usually lower than 20 euros each way. The Direct Express buses all take less than 5 hours (although it IS Flixbus, so expect some delays). Overall this means you could catch a bus after work and have pretty much the entire weekend to spend in Prague.

While there ARE trains from Munich to Prague, the arguments aren’t super compelling to choose the train over the bus. Here’s why: the trains are not only pricier than the bus, but usually take about the same time or way, way longer. DB doesn’t seem to do direct trains, which means multiple stops and journeys up to 12 hours, which is absurd. There are Alex trains on the weekend that will get you there in less than 6 hours, but they’re double the price of the bus.

If you wanna be a princess and enjoy a more comfortable journey, then maybe take the train (look up times here). Otherwise, just suck it up and take the bus because yay – more money for beer!

Okay, honestly, flying from Munich to Prague makes no sense. The flight is less than an hour, sure, but once you factor in commuting time to/from the airport, and also arriving 2 hours early, etc. the time you spend is pretty much the same as catching the bus, and it will literally be 10x more expensive. Again, use Omio to find the cheapest option for your dates, but odds are good that it won’t be a flight!

If you don’t mind getting cozy with some strangers, another cheap option is to go with BlaBaCar, which is a carpooling service that connects drivers and passengers so they can split costs for fuel, etc.

It’s definitely legit, I know lots of friends who use it, but just like with anything else, READ REVIEWS. If it’s some sketchy guy with no profile picture and zero reviews, then yes that 5 euro ride might be a murder in disguise. Otherwise, there are people regularly making this drive and offering up seats for 10-15 euros. The drive is usually around 4 hours, which isn’t much less than a bus, BUT you’re more likely to find cheap last minute deals this way (as bus prices usually spike close to the travel dates).

Where to Stay in Prague

We always like using Booking.com to find accommodation because the rates are good, you can make a reservation without paying in advance AND most of the time, the hotels have lax cancellation policies so you can always cancel last minute without any penalty. It’s easy and requires minimal social interaction. Perfect for us. Click here to search the best deals on accommodation in Prague.

Hostel One Home – Stayed here on my first trip to Prague years ago and it was the best hostel experience ever. Yeah it’s kinda groddy (it’s a hostel after all) but the activities they organize are so fun and it’s a super social place. It’s also well located and cheap as hell.

Park Inn Hotel – Awesome price and glowing reviews online. It’s not directly in Old Town, so it has a quieter vibe and is farther from attractions, but you can easily reach everything with public transit anyway.

The Four Seasons – I mean, it’s Four Seasons. Timeless, upscale, ridiculously ornate… if that’s your kinda thing, go ahead and ball out.

Prague in a Weekend from Munich: Awesome Things to Do

Okay, so Prague is one of those cities where there’s a lot of typical tourist things to do, but despite their popularity, you still gotta do them… you know? You can definitely get “off the beaten path” in Prague if you want, but to us, the best parts of the city really are the touristic ones. Here are a few must-dos for your list:

One of the most beautiful bridges in Europe… but also mega-packed. Come here early in the morning to enjoy the bridge properly (and get your mandatory photos). Otherwise, you’ll hate it.

I know, those of us living in Munich are like “pfffft you want me to come to YOUR country to see castles? Have you seeeeeen Neuschwanstein?” Sure we’ve got some fancy castles in our hood, but Prague Castle is technically the largest castle complex in the entire world, soooo it’s definitely worth checking out, even for the sweeping views.

The Czech Republic has damn good beer, and yes, it’s cheap. The Strahov Monastery brews up some excellent beer (pivo in Czech), but it’s a little pricier and out of the way. Everywhere will have beer though (you’ll see more signs for Pilsner Urquell than actual street signs).

If you want something a little quirky, touristy, but fun, check out THE PUB Praha 2. There are taps on the tables and you can pour your own beer and get absolutely hammered for cheap. They also keep track of how much you pour and put it on a fun competitive scoreboard at the front of the bar.

Last but not least, if you can’t go a weekend without indulging in a beer garden, check out the Letná Beer Garden so you can make petty comparisons between their biergarten culture and ours.

Yeah it’s a wall full of graffiti but it’s a cool place to check out, and feel free to bring your own spray paint to go wild. It’s not just a graffiti wall though, the story behind it is something special – the wall used to be a symbol of resistance against the Communist regime, where people would graffiti messages of love and peace. It still stands today to honour those ideals. Lovely jubbly eh?

Prague is a hilly city with lots of cool towers and viewpoints, which means there are tons of amazing views to freak out over.

Here are a few of the best:

6. Get your culture on and visit a museum

Okay so this honestly isn’t super high on my personal priority list in Prague, but there ARE dozens of museums in the city to enjoy. It might make you feel a little less guilty about this beer-filled holiday. Here’s a list for ya.

7. Enjoy some peace and serenity

So if you get sick of rubbing elbows with fellow tourists, Prague has a lot of lovely green spaces and little oases (is that even a word?) that you can take advantage of. Personally, I recommend taking a stroll Around Wallenstein Garden, it’s a magical Baroque Garden that has casual peacocks just strolling around. Pretty majestic. Letná Park is also nice.

8. Check out the Dancing House

Kinda silly, but one of those “must sees” even though it’s literally just a wonky looking house.

Don’t get too hammered before sundown, because Prague at night is just magical and spectacular. Be sure to take a walk around at night to enjoy all the monuments lit up, before you promptly get lit yourself. FYI, Prague is home to the biggest music club in Central Europe (whatever that means… it’s just a giant club spanning a few floors, one of which is an ice bar). It’s called Karlovy Lazne and it’s kinda gross to be honest, it’s like the kind of place you’d end up at the very end of the night and only like it cuz you’re plastered. It’s not an authentic experience, but a fun-ish place if you’re with friends and just wanna dance and be messy. 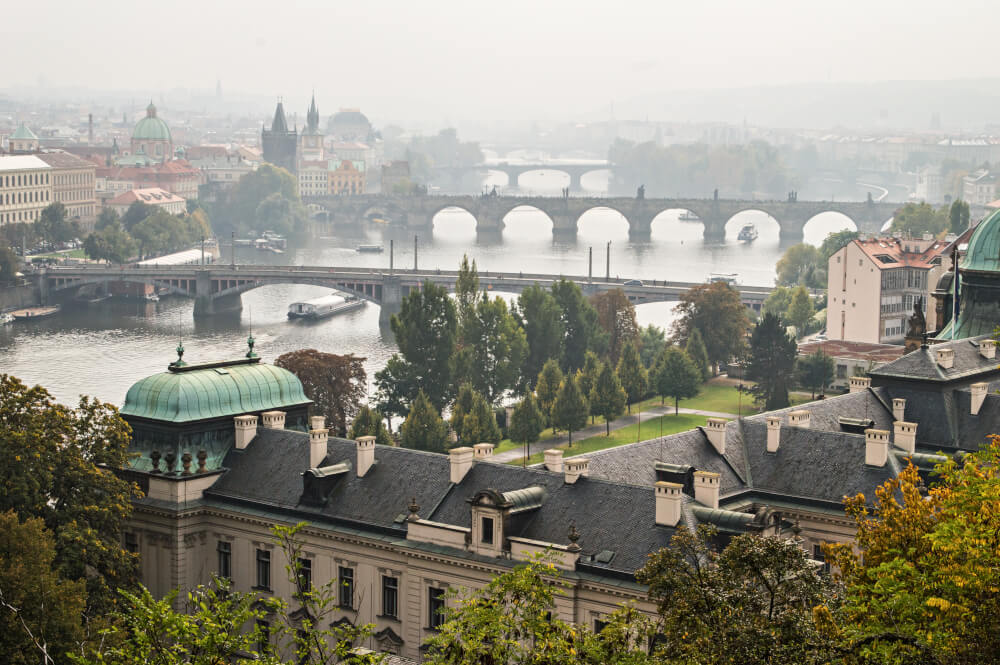 Other Random Tips for Visiting Prague from Munich

If you want to properly enjoy the city, get up ridiculously early

So, Prague is commonly recognized as one of the best cities in Europe to visit, hence the insane amount of crowds, especially in peak season. If you want to enjoy ANY of the big attractions without crowds (Astronomical Clock, Charles Bridge, etc.) you’re going to need to get up early… like, sunrise early. Roam the streets before 8am and you’ll feel like the city is all yours.

DO NOT EXCHANGE YOUR MONEY NEAR ANY TOURIST ATTRACTIONS

The currency exchange places in Prague are a total rip-off. Avoid them at all costs. If you can just withdraw some local currency at an ATM, do that instead or say bye to your hard earned moola.

Prague’s taxi scene is notorious for scamming tourists. After all, we’re easy targets hey? If you do need a taxi, make sure you agree on a price beforehand (although this sometimes isn’t even enough, as we learned the hard way). Some locals say that if you order a taxi by phone, you get a text with an approximate fare and it’s way less sketchy because the taxi is then monitored.

PS: We’ve heard they have Uber now, so check to see if that’s an option.

The best view is from a freaking Starbucks

Really random, but the best place to get photos from Prague Castle is from the rooftop patio of the Starbucks. So, treat yo’self, get yourself an indulgent diabetichino and sip away as you laugh at all the other tourists who have come to selfie at the same place as you.

This is a hot tip for any major European city. Restaurants and bars near tourist attractions will no doubt be way more expensive and usually suffer in quality. Walk a few blocks away from the mainstream attractions and your wallet/stomach will thank you.

It’s like Munich, just having a transit ticket isn’t enough – it needs to be validated. Don’t get busted by them Czech transit police, please.

Don’t get us wrong, the Astronomical Clock is gorgeous to look at, cute to pose with, great profile pic material…… but the show that happens every hour? Oh my god, literally the most useless and disappointing show on Earth. It’s like if the Glockenspiel toned down the action by 10 notches, and the Glockenspiel isn’t even that exciting to begin with, naw what I’m sayin’? It’s almost more entertaining to go and watch the disappointment wash over the thousands of faces gathered in the square, because it’s pretty hilarious. Anyways, if you’re crunched on time, give it a miss. 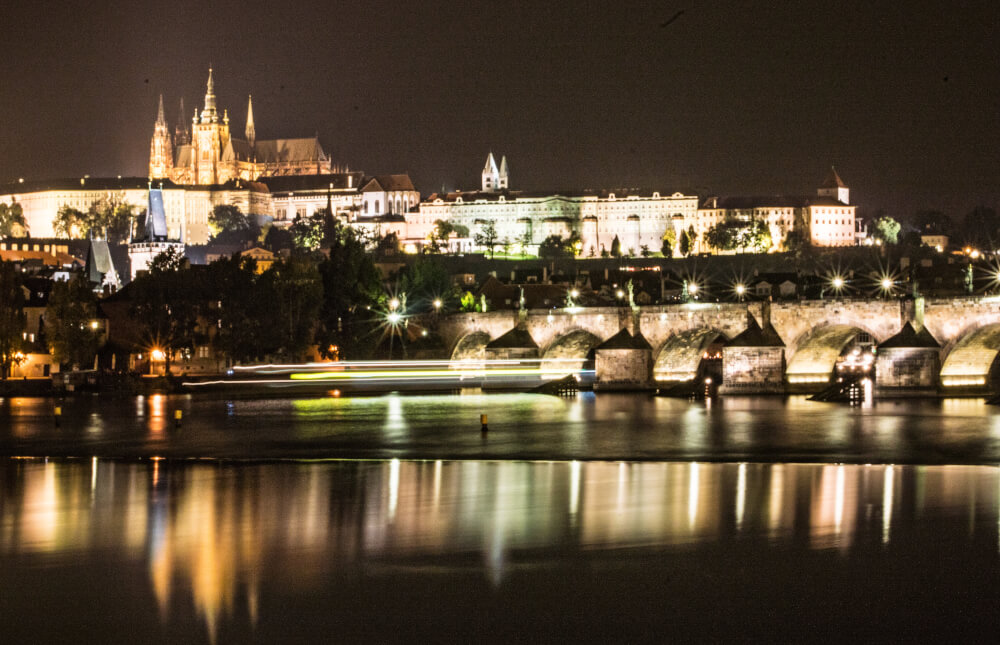 Okay, have fun – bye bye! We hope you enjoy Prague, and if you found this guide helpful, do us a favour and use some of the affiliate links above. They come at no extra cost to you, we just make a small commission which means we get some extra coins to tip the judgey bathroom attendants in Munich so they don’t hate us. We all win! Yay!

On Sundays, Admission is 1 Euro at These Munich Museums