It’s a Sunday. Everything is closed. Your sporty friends are trying to guilt you into hiking 5 hours up a mountain, which sounds like more exercise than you were planning on doing this entire month…

All you really want to do is sit and enjoy a nice cold beer and pretend that tomorrow isn’t Monday….

Well, let us present to you our epic DIY Beer Garden Tour of Munich! The perfect compromise between exercising and relaxing on a sunny summer Sunday. This route takes you on a whirlwind tour of beer gardens representing each of Munich’s ‘big six’ major breweries… which we think counts as a major achievement.

The route starts with a stroll through the English Garden and ends at the Augustiner-Keller, ideally located near the Hauptbahnhof so you can drunkedly stumble into whatever train you need to get home.

Here’s some basic info before we get started…

Now, let’s get to it! For the full map route, click here.

Positioned on the edge of the English Garden, the St Emmeramsmühle is the perfect start to your day of wandering/staggering/crawling through the city of Munich.

And for those snobs who aren’t Spaten fans, just bear in mind that you get it out the way first. You gotta earn that Augustiner, son! 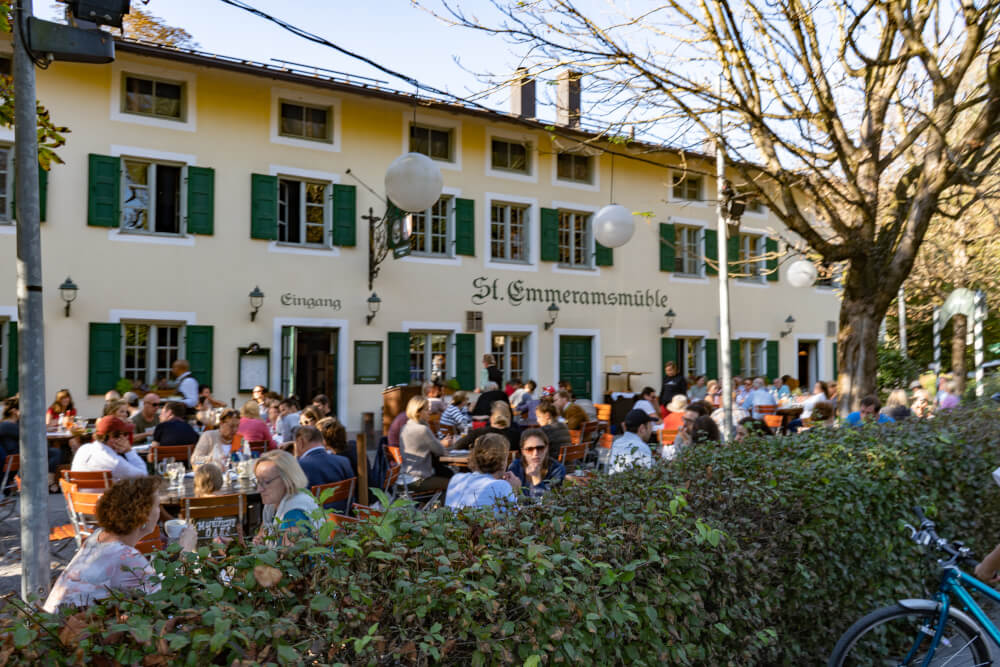 After a wander through the garden, (don’t worry that’s the longest you will have to go between beers on this expedition), you will arrive at Hirschau Beer Garden. With some large trees for shelter and often a band playing on Sundays, it’s a great second stop before you refuel for the long arduous trek all the way to the other-side of the motorway.

Note: the playground is for kids only. Trust us.

Congratulations, you successfully made it a total of roughly 100 feet.

… Which means you deserve a Helles.

With a view overlooking the lake, Seehaus is one of our (personal) favourite beer gardens, and an excellent halfway point for the tour.

Note: The lake here is only about 30cm deep near the shore. Trust us. 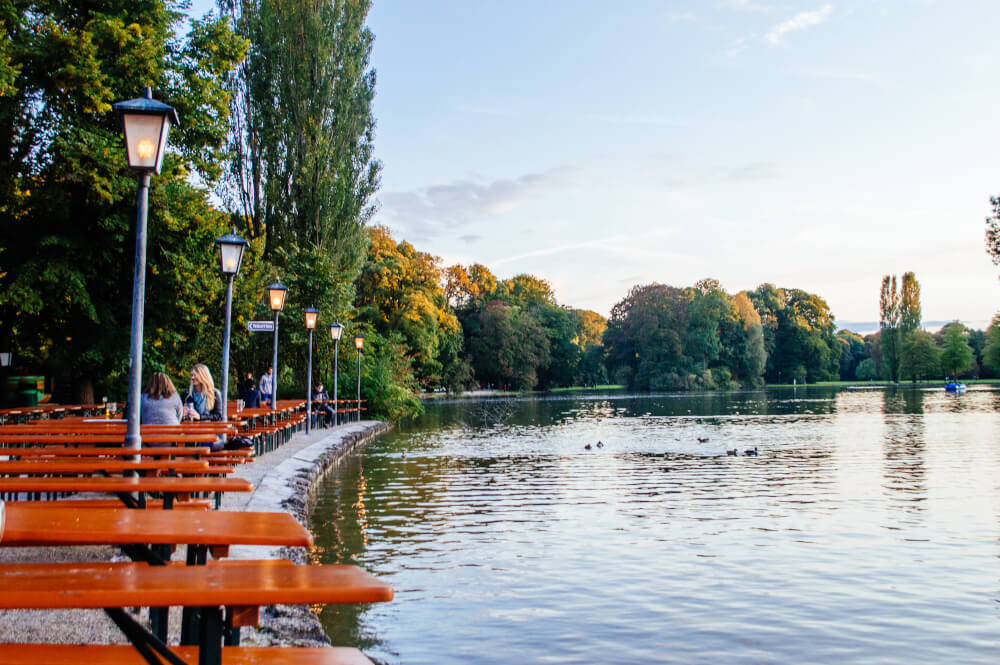 Despite being filled with wide eyed tourists taking selfies with their “steins”, and expats who have run out of things to do when their parents have come to visit, the Chinese Tower always has a great atmosphere. While not one of the most traditional Bavarian beer gardens, with so many visitors from around the world, it’s a great place to meet some friendly new faces… or at least marvel at their blurriness (because let’s be honest, your vision won’t be that great at this point). 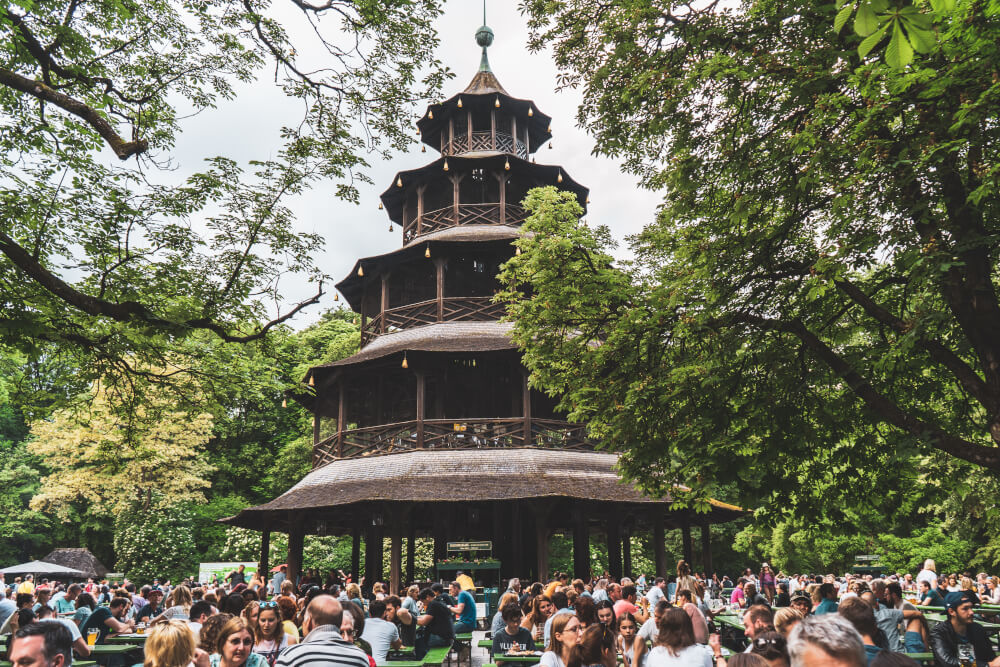 After leaving the English Garden and wandering through the Hofgarten to Odeonsplatz, the next stage is a short wander through the city to Viktualienmarkt, where you’ll find “Der Pschorr” which has a lovely beer garden.

*Bonus Round* If you don’t think merely 6 beers will quench your thirst (what kind of machine are you?!) then why not ALSO swing by the Viktualienmarkt Beer Garden before moving onto the next stop? With a rotating schedule of beer, you never know which of Munich’s breweries will be on tap that week. 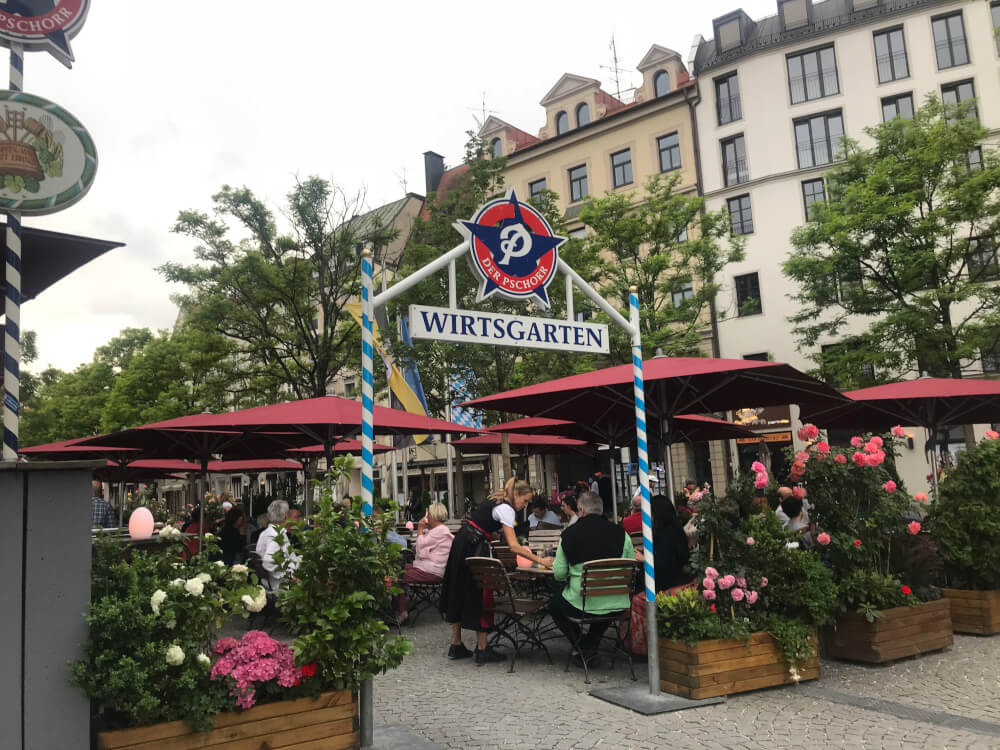 Last but not least, we’ve saved the best for last: Augustiner!

To reach the Augustiner Keller, you can easily walk (or stumble) through town. Honestly, we’d be impressed if you were still upright.

Note that if don’t feel like walking anymore, because you’re incredibly impatient and want your Augustiner NOW, then hop on the S-Bahn at Marienplatz and ride a couple of stops to Hauptbahnhof… we wont judge you (much). From there, it’s less than a five minute stagger to the Augustiner Keller.

This Augustiner Biergarten is one of the largest in Munich with around 5000 seats, and half the tables (the ones closest the main entrance) even offer table service. In our humble opinion, this the perfect place to get that last round of Helles whilst slurring congratulations to the surviving members of your beer crawl team.

…. Now best of luck getting home. 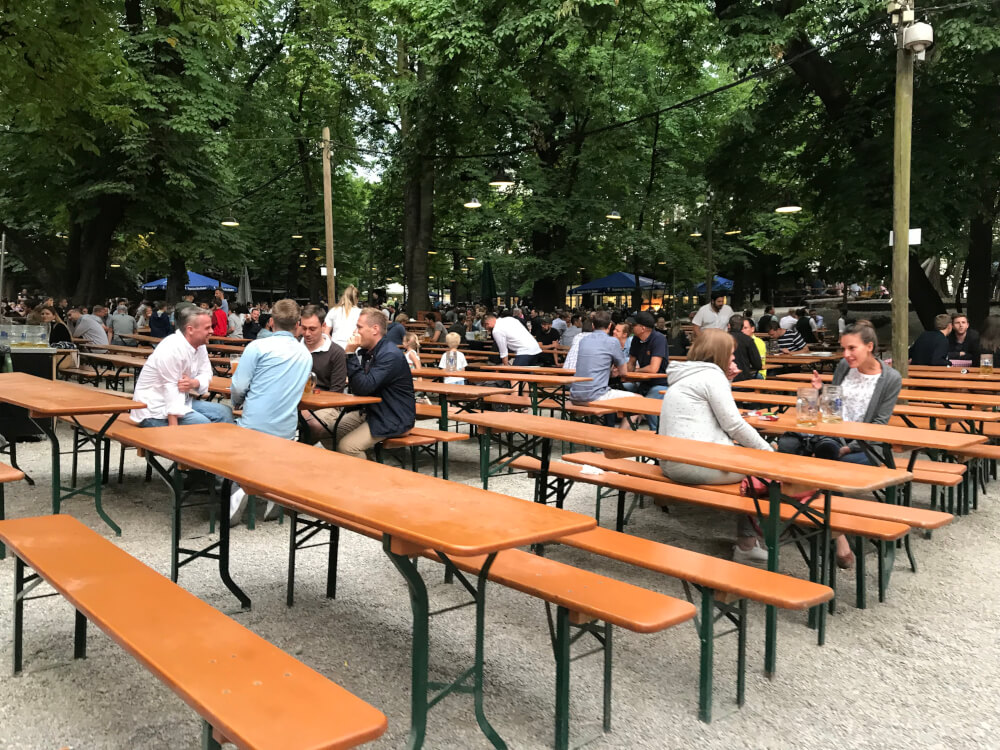 Don’t think you can handle a Maß at each beer garden? Don’t worry – half Maß options are available at all the beer gardens listed above (if you aren’t interested in consuming more beer than most people consume during a day at the Oktoberfest). But then again, Monday’s suck with or without a hangover.

So, grab a few friends, tell them you have a “hike” planned and experience the outdoors the way it was meant to be enjoyed, with a nice cold beer in hand!