Home Obscure Munich Hidden Gems Secrets of the Maximilianeum & Those Who Live in It: Elite Scholarships,... 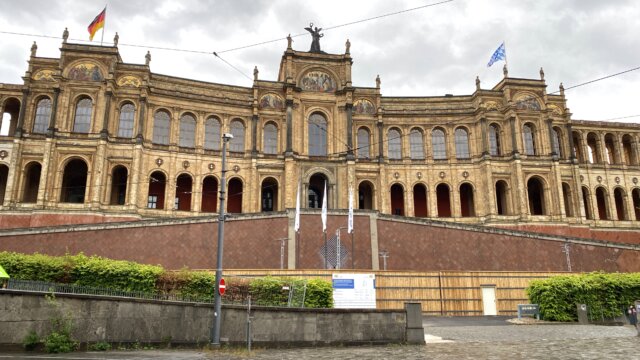 While not typically part of the usual sightseeing or tourist trek, the Maximilianeum in Munich is hands down one of the city’s most distinctive and imposing structures.

Perched on a hilltop in Munich’s elegant Haidhausen neighbourhood, this landmark stands majestically at one end of luxury shopping mecca, Maximilanstrasse… but as commanding as its presence is, it’s the history and purpose of the Maximilianeum that make it one of the most important and interesting buildings in the entire city.

In this post, we’re going to cover everything you need to know about Munich’s Maximilianeum, from what it is, the building’s history, its mysterious and prestigious scholarship program and the secret Sunday brunch that you, too, can book tickets for!

What is the Maximilianeum?

We’ll start with what the Maximilianeum actually is.

The Maximilianeum building can be found on Max-Planck-Straße 1 in Munich’s Haidhausen borough. Located on a hill along the Isar River, it’s a pretty impossible sight to miss, marking one end of Maximilianstraße, a notoriously luxurious shopping street that leads straight into the heart of Munich’s Old Town.

The Maximilianeum Foundation is the entity that owns the building. It was formed by King Maximilian II in 1852 under its original name the “Athenaeum” to help gifted young men fulfill their potential regardless of social background, and to groom them for civil service. The foundation accomplished this by granting scholarships that allowed recipients to pursue the study of law and political science without financial burdens.

Much has changed over the years with the foundation – for one, recipients are no longer bound to civil service or the fields of law or political science. Moreover, since 1980, a second foundation known as the Wittelsbacher-Jubiläums-Stiftung has been granting the same scholarship to female students.

In spite of all these changes, the overall mission of the foundation has remained the same, and today it continues to empower gifted students to study stress-free with a generous and exclusive scholarship that includes room and board in the Maximilianeum itself, as well as a host of opportunities like exchange programs and an annual trip. Unsurprisingly, this is one of the most elite scholarships in the country, with only 6-8 new recipients chosen each year from a pool of 400+ students at the top of their classes. 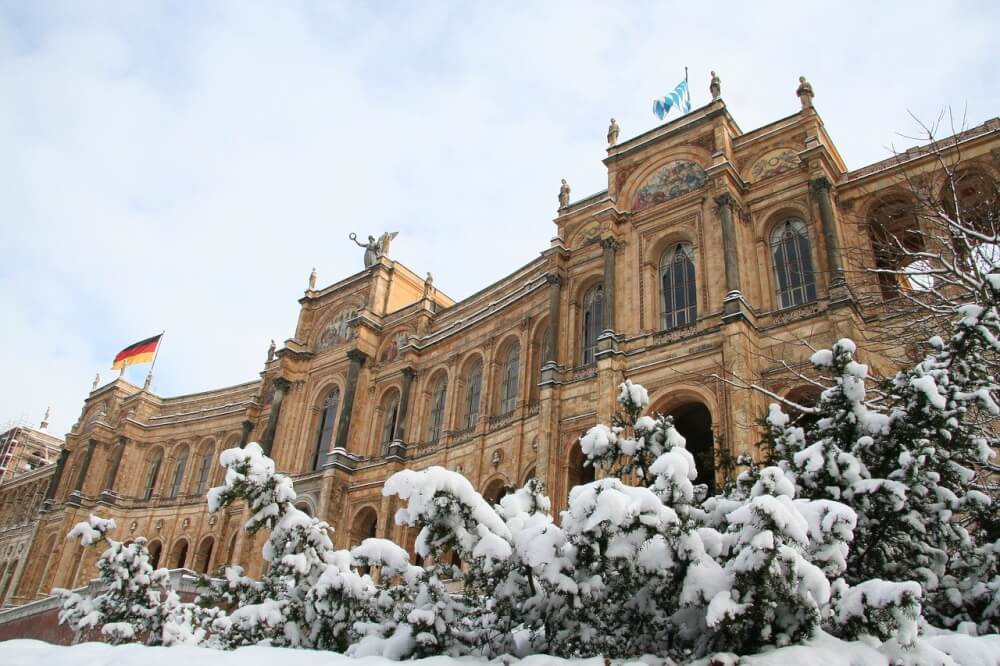 A Brief History of Munich’s Maximilianeum

As mentioned above, while King Maximilian II established the Maximilianeum Foundation (then the “Athenaeum”) in 1852, the actual building as we know it now didn’t break ground until 1857, following a lengthy search for the perfect architect and design. German architect Friedrich Bürklein was eventually chosen for the job, and in the interim, scholarship recipients were housed in an apartment building… which we’re sure wasn’t nearly as grand.

The laying of the Maximilianeum’s foundation stone took place on October 6, 1852 on what was described as a rainy and stormy day. Even more dramatically, it is said that a 200 member choir sang a song specially written for the occasion, with lyrics (translated to English) including:

“On the heights there should be a noble education, safe haven, rich spiritual fruit, as a quiet muse place. Bavaria’s hopeful sons, Max builds an asylum here, all true, good and beautiful stars are her shining goal”

Construction went on for years, and the building wasn’t completed until 1874. You can click here for a more detailed account of the building’s history.

And while Maximilian II unexpectedly passed away before he could see his vision come to life, the Maximilianeum did indeed come to serve its purpose as a home for gifted students, as well as a venue for various academies including a royal page school and a German cultural academy.

During WWII, the Maximilianeum became a favoured venue for Nazi propaganda events, as well as home to a gallery in which Nazi-compliant art was shown to visitors. By the end of the war, 2/3 of the building would have been destroyed by bombs. Under the helm of Karl Kergl however, the structure was rebuilt, and in January 1949, the new tenants (AKA the Bavarian Parliament) moved in. You can read a full timeline of construction and additions after that on the official website here.

FUN FACT: in 1998, workers accidentally drilled into the original foundation stone while doing restorations and discovered a time capsule from that very day which included portraits of the king and queen, some historical coins, and weirdly, a model English locomotive that was included at the behest of the architect. Learn more about that here. 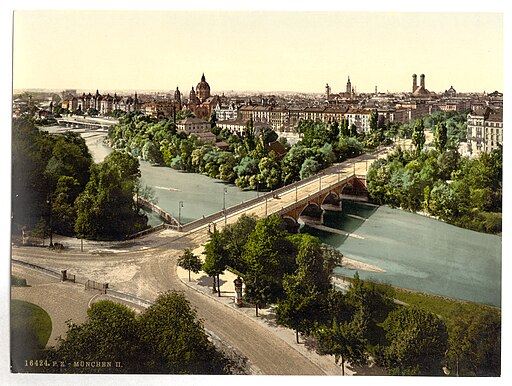 So… What do Maximilianeum Scholarship Recipients Receive?

By now, you know the history of the Maximilianeum building, what it stands for, and of course, the fact that it hands out one mega-swanky scholarship.

If you’re curious about what this scholarship actually entails, listen up. It’s pretty sweet. Here are some of the known perks available to those who are chosen.

PS: If you want a good laugh, check out the original House Rules from 1852 and the amazing packing list that students were required to use. It includes wonderful gems such as “one large black hat”, and the (supposedly still respected) rule that every student is entitled to half a litre of beer with every meal.

Every scholarship recipient gets to live inside the Maximilianeum itself, with their own furnished room and a cleaning staff on standby to tidy up. While according to this student interview, the rooms are pretty ordinary, a huge additional perk is hot meals! Scholarship recipients get a full buffet for both breakfast and lunch, and a hot evening meal is also offered.

You can click here for a peek at what some of the Maximilianeum facilities look like (e.g. dorms, hallways, etc.)

Yup – according to this interview, the scholarship recipients don’t even need to do laundry.

Besides their own rooms and shared kitchen space/bathrooms, scholarship recipients also have access to a wide range of common spaces. According to the official Maximilianeum website, this includes access to standard dorm-like amenities like the legal, natural and humanities library, the computer room, TV room, printers, scanners, and copiers…  plus the not-so-standard amenities like a ballroom and party cellar.

Another perk of Munich’s most exclusive WG? Fitness classes like Zumba that take place once a week with a professional! according to the official Maximilianeum website, those who prefer to work out in solitude will be able to make use of the state parliament’s fully equipped fitness studio.

According to the official Maximilianeum website, scholarship recipients also have access to exchange programs with partner institutions such as, you know…. Oxford. No big deal.

The best part is the Maximilianeum itself also takes in some exchange students as well, who get all the perks of scholarship recipients. Can you imagine?

Last but not least, a final (pretty wonderful) perk of being a Maximilianeum Stipendium recipient is you get to go on a fun Spring Break trip every year. Really! These so-called “Study trips” whisk the students away to a different country every year, including Portugal in 2019.

Unsurprisingly, recipients of the Maximilianeum scholarship frequently move on to become distinguished leaders of their field. Some notable alumni include former Bavarian Minister Presidents like Eugen Ritter von Knilling and Franz Josef Strauss (yes, the same Franz Josef Strauss that Munich Airport is named after!), along with the Nobel Laureate for Physics, Werner Heisenberg.

Last but Not Least: How to Enjoy a Maximilianeum Brunch

Alright, so we teased the possibility of having lunch at the Maximilianeum early on in this post, so now you’re going to find out how!

Picture this – you’re dressed in your Sunday best, stuffing baked goods in your face in the Bavarian Parliament restaurant where all of Bavaria’s most accomplished politicians (and their esteemed guests) get their feed every day. This is a dream that can indeed come true.

Yup – while the Maximilianeum restaurant is of course restricted on weekdays to only parliament members and their guests, their doors actually open on Sundays for a special Sunday brunch that anybody can purchase a ticket for. And yes, it’s a buffet, so come hungrier than a politician for power. … Just kidding. This is the exact kind of joke you would want to avoid when enjoying said fancy brunch.

6 Autumn Activities in Munich to Enjoy with Kids

The World’s Largest Pumpkin Festival is Near Munich. Here’s How to Visit

There’s a New (Mini) Palm Tree Garden at Theresienwiese! Here’s What It Looks Like