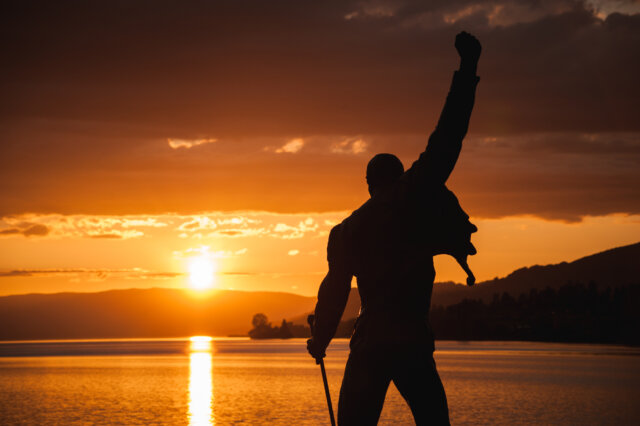 It’s a little known piece of Munich history that Freddie Mercury, frontman of Queen and one of the most legendary characters in rock history, once called Munich home.

… For a pretty long time in fact! Here are 8 facts you should know about the link between Munich and Freddie Mercury.

Of course, for some of these years he would bounce between London, Munich and some other cities, but he spent a great deal of time here in the late 70s/early 80s. The main draw? Peace and quiet. He could live, walk down the street, and party without being bothered and trailed by press like back home in London.

According to Freddie’s former personal assistant, “Freddie’s initial address when we moved to Munich for the recording of Mister Bad Guy was the Arabella Haus. He lasted there 1 night before he moved into an apartment near Sebastians Platz. He did spend some nights at Barbara’s apartment on Stollberg Strasse above the Oyster Cellar. After a short visit to England Freddie, Jim and Joe returned to the Stollberg Plaza while the apartment Freddie bought with Barbara on Hans Sachs Strasse was being built. Freddie returned to England for good before Barbara actually moved in so never actually spent a night there.”

2. He loved partying in the Glockenbachviertel

Besides living in Munich’s beloved Glockenbachviertel, Freddie also loved the party scene there. According to Peter Ambacher, a member of Freddie’s entourage during his Munich days, he frequented Frisco on Blumenstrasse (now the bar known as Padres), Ochsengarten on Müllerstraße, and Die Deutsche Eiche on Reichenbachstraße.

3. Freddie Mercury celebrated his 39th birthday in Munich with an outrageously epic party

Henderson’s Night Club (now Paradiso Tanzbar) was a hot dancing venue back in the late 70s/early 80s, and it was here that Freddie hosted his now infamous 39th birthday party, a hedonistic, wild and extravagant night where Freddie flew in dozens of his closest friends and demanded that they dress in black and white drag. Some consider this one of the wildest and most notorious parties in rock history… but hey, this was only 2 months after Queen’s legendary Live Aid performance, so I guess they had plenty to celebrate.

You can catch clips from the party here:

4. … He also filmed his music video for Living on My Own the next day

Yes, the iconic video for Freddie’s solo single Living on My Own was filmed in Munich at the same nightclub the day after his birthday bash. The video also features clips from the party.

5. He recorded quite a bit of music in Arabellapark

The (now defunct) Musicland Studios was once a hot recording venue for huge musical names in the 70s and 80s, including Led Zeppelin, the Rolling Stones, Deep Purple and of course, Queen. The studio no longer exists (rumour has it the nearby U4 line was too loud for recording), but once upon a time, it was located in the basement of what is now the Sheraton at Arabellapark.

Freddie recorded a lot of music here. Most notably, he recorded his solo album Mr. Bad Guy at Musicland, and even the music video for One Vision. So, yes, all this was happening in the basement of the Arabellapark Sheraton. Who would have thought?

6. Freddie got pretty good at German swear words while he lived here

According to Freddie’s former personal assistant, Peter Freestone, “Even though he lived in Munich for so long, he only really mastered a few swear words that the locals gleefully taught him”, which is pretty relatable TBH.

You can catch some of Freddie’s erm… colourful vocabulary in this brief interview excerpt. The full interview can be seen here.

7. … and also had a fondness for pork knuckles

It was a dish his Munich beau Winnie Kirchberger often prepared for him.

It has also been said that he frequented Zum Alte Markt, a Bavarian restaurant which still stands in Viktualienmarkt today. supposedly it was “where Freddie ended up every Tuesday morning after Fasching” (source).

8. Freddie Mercury had two notable companions while in Munich

While Freddie no doubt enjoyed a large entourage/clique in Munich, two names in particular are frequently attached to his time here. First, Winnie Kirchberger, a restauranteur/host was his main beau. It’s said that Freddie used to throw roses at his window and once even gifted him a Mercedes for his birthday. His second main companion was Barbara Valentin, an Austrian actress who he lived with for a period of time. Reports are split on whether or not the two had a romantic relationship or simply a platonic one, but they were definitely close, so much so that some feel betrayed by her lack of role in the recent biopic, Bohemian Rhapsody.

But perhaps Freddie’s life was just too colourful and grand for a single film… What do you guys think? Maybe a movie ought to be made of his time in Munich?

Secrets of the Maximilianeum & Those Who Live in It: Elite Scholarships, Sunday Brunches & More!

20 Epic & Unique Airbnbs You Can Book in Germany: Treehouses,...