The Chinese Tower Beer Garden: Everything You Need to Know

The Chinese Tower beer garden is probably one of the most famous and well-known beer gardens in the city.

This guide will walk you through everything you need to know about visiting the Chinese Tower Beer Garden.

Found in the heart of Munich’s English Garden (one of the largest city parks in the world!) is the Chinese Tower, a pagoda-ey multi-level structure that serves as the centerpiece for one of the city’s most beloved beer gardens. The Chinese Tower beer garden is the second largest in Munich, offering over 7000 open-air seats at benches arranged all around the tower (which also houses a band when the weather is good). Despite its immense popularity with visitors and locals like, you’ll never struggle to find a place to sit down…. you might need to get cozy though and make some new friends 😉

With tons of food options on offer, this lively and buzzing beer garden is a great place to spend an afternoon… just don’t forget a deck of cards!

Seehaus serves Hofbräu beer at €7.70 per Maß of Helles.

The food selection is pretty extensive at the Chinese Tower Beer Garden, and although prices aren’t the cheapest, you won’t go broke either. You can tuck into all the typical Bavarian specialties like pretzels, Obatzda, pork knuckle, Käsespätzle and more, plus other German musts like currywurst and a variety of sausages. 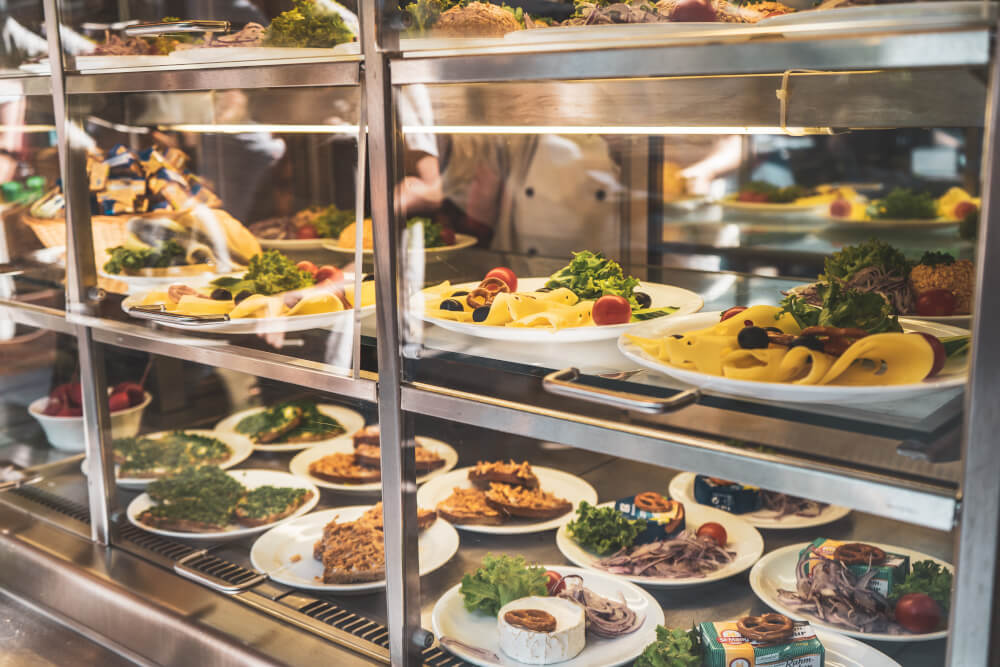 Overall vibe and crowd at the Chinese Tower Beer Garden

The Chinese Tower Beer garden is tremendously popular with tourists, and this will usually be the “go-to” for those who are only spending a few days in the city. English will be very common here for that reason. The garden is also very popular with young people, as the university is close by. Despite its popularity though, we wouldn’t say the Chinese Tower is a total tourist trap – there are plenty of locals here having a great time, and the atmosphere is really lively and fun, especially when the band is playing.

That said, if you’re looking for a more peaceful beer garden experience free of stag dos, loud groups of teens and confused tourists baffled by the Pfand system, you’re probably better off elsewhere.

In fact, the Seehaus beer garden is only a short walk away, and far less well-known by the tourist crowds.

How to get to the Chinese Tower Beer Garden

BY U-BAHN: Take the U3/U6 to either Universität or Giselastraße (the walking distance from either is about the same)

Other Tips for Visiting the Chinese Tower Beer Garden

I imagine these guys get their glassware stolen a LOT, hence why the whole token/pfand system is heavily enforced here. When you buy a beer, you’ll be paying a deposit (Pfand) and given a token which you must return with your Maß in order to get your money back.

Bring your own food

Like in any Munich beer garden, bringing and consuming your own food from home is A-OK here, so long as you buy a drink.

Get fancy with a nice table setting

In addition to bringing homemade food, many locals will come ready with a nice table setting too, including tablecloths, fine plates and sometimes even candles for mood lighting 😉 Certainly a nice place to host a dinner party, don’t you think?

This annual folk dance event takes place on the third Sunday of July (weather permitting) and is one of the coolest community events that take place during the year. During the Kocherlball, people get up as early as 4am to snag their table at the Chinese Tower, and then they dance the morning away with thousands of others. This event originates from a 19th century tradition in which domestic workers (e.g. cooks, nannies, etc.) used to meet up on Sundays very early in the morning before work so they could dance.