The Pissoir: Munich’s Hidden Toilet Tribute to Famous Residents of the Glockenbachviertel

A walk through Munich’s vibrant Glockenbachviertel is sure to yield some surprises – from its hefty selection of restaurants and bars to a glittery pink Christmas market… but seeing Freddie Mercury’s face on a public toilet? Well, that’s a whole new level of surprise.

But make no mistake – this beautifully moustached piece of graffiti is more than just a fun piece of street art – it’s 1/3 of a quiet tribute to some of the district’s most famous residents.

Take a 360 loop around and you’ll also come face to face with a young Albert Einstein (almost unrecognizable in his youthfulness) and famous German filmmaker, Rainer Werner Fassbinder.

Yes, believe it or not, all three did at some point call the Glockenbachviertel home.

These three portrait panels are part of The Pissoir, a (city-approved) art project that immortalizes some of the Glockenbach’s most prominent guest stars. The method? None other than painting their famous mugs atop an out-of-use Klohäusl (which, according to SZ, was built in 1900 and has the unique honour of being Munich’s only cast iron octagon).

Spearheaded by local writer/artist Martin Arz, along with Thomas Zufall (owner of Cafe-Bar München 72), the Pissoir seeks to cast a spotlight on some of the Glockenbachviertel’s most famous residents, individuals whose connection with the neighbourhood may not be known to most passerbyers.

With the help of the design team “Graphism”, the two brought this vivid vision to life after years of planning and approvals, bringing a pop of colour and whimsy to the quiet Holzplatz.

The Three Stars & Their Connection to the Glockenbachviertel

So who are these three men that are painted on the Pissoir? Odds are you know them already, but here’s how they are connected to Munich’s precious Glockenbach:

The Pissoir in Glockenbachviertel: Basic Info

Wanting to see the Pissoir for yourself? Here’s what you need to know.

Where to find it: Holzplatz

Hours: None, the installation is located on public grounds and is accessible at all hours of the day

Pissing potential: Nope! This beauty hasn’t been used as an actual toilet for decades now, so don’t even think about it… 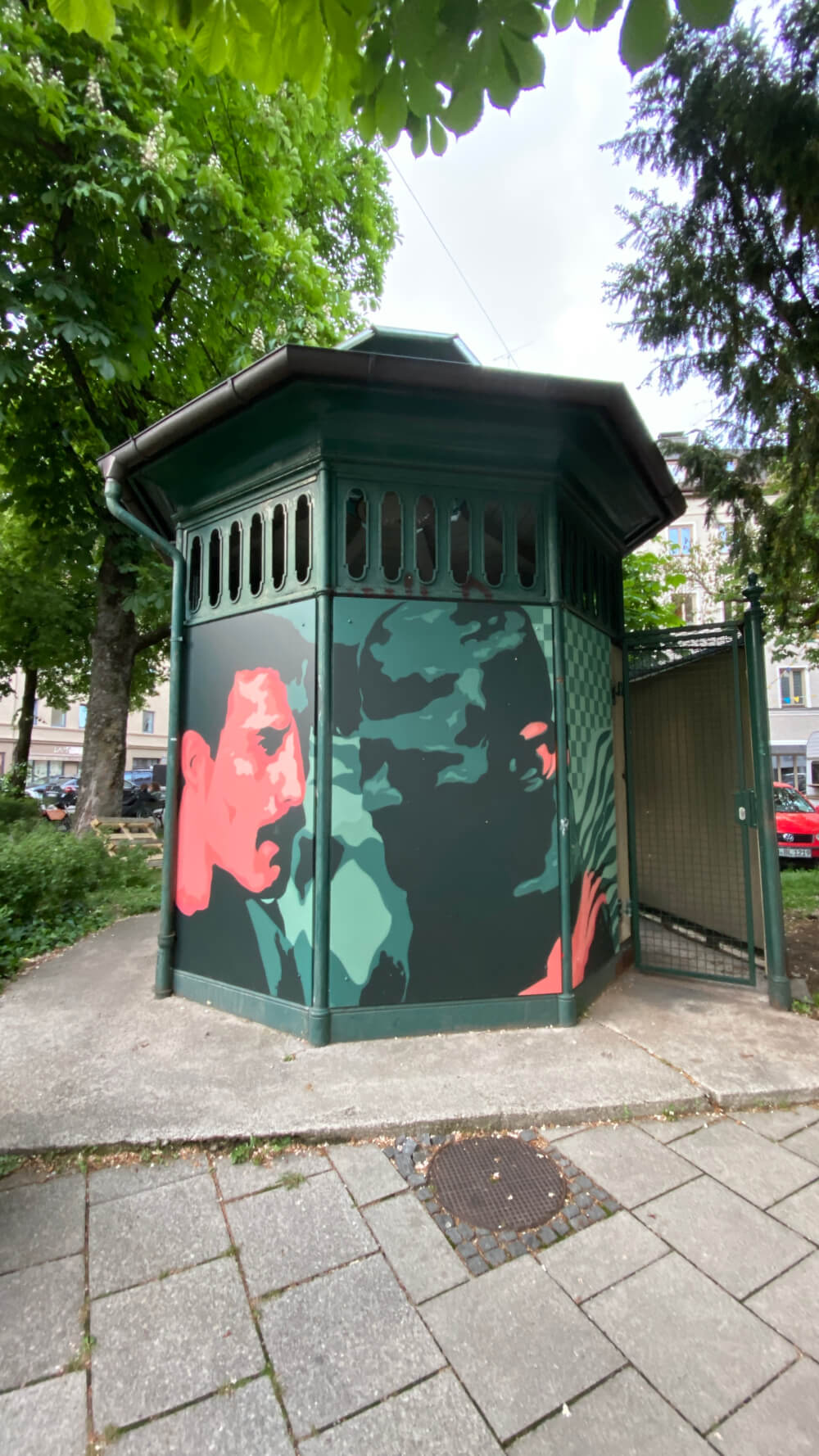