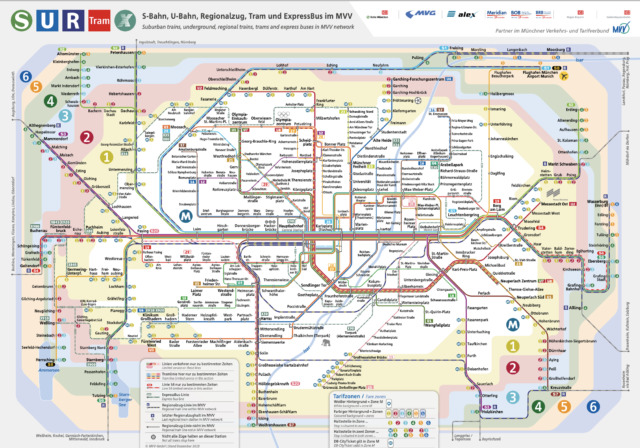 Beautiful bored people of Munich, in case you missed the news, BIG changes are coming to MVV’s zones/pricing structure on December 15, 2019… changes that will almost certainly impact your public transport commute and how much you pay.

Between abolishing rings and raums, raising/lowering prices, and getting rid of certain special tickets, some say this mid-December change will be the largest reform to the MVV system since its creation in 1972!

So, what do you need to know about the MVV changes coming into effect on December 15? Here is an easy guide with the key changes and takeways, along with how you might be affected.

Figuring Out How the New MVV Prices Impact You

As confusing as it might seem at first, there’s a very simple way to figure out how much you will pay for your commute in Munich from December 15 onwards. Click here to access the MVV Tariff Checker, which shows you the new price you’ll pay for your usual ticket, along with the percentage difference in price.

NOTE: We’ve tried a few different routes/ticket types on this checker and have found that it can be a bit glitchy and has given the wrong price a few times, usually related to kids’ tickets. We’d suggest you double check the values by cross-checking the MVV price table here with where your stops lie on the new tariff map here. It’s a bit of extra work, but better safe than sorry!

Alright, now onto the changes. WARNING: There’s a lot of them, some good, some bad, all of course depending on your individual transport needs. So, here are the most important things for your to know. You can click here to read the full scoop from MVV directly.

Those who travel frequently within the Munich city centre will be thrilled to know that rings 1-4 will be merged into a 90s boyband sounding area known simply as “the M Zone”. In practice, this means you’ll be able to travel freely throughout most of Metropolitan Munich without worrying about zones. Here’s a photo of what the giant M-Zone will look like:

There are no more rings or “raums” – only zones

Let’s face it – the MVV system has always been a bit of a confusing mess. Between rings, zones and raums, knowing which ticket to buy (certainly for newcomers!) was often just as confusing as Der, Die, Das… BUT under this new system, things will be much simpler, with 7 zones in total (including the M-Zone), and no need to sob while pondering whether you need rings, zones, or raums.

Unfortunately, this simplicity comes at a cost… literally. Einzelfahrkarte (single trip tickets) as well as Tageskarte (day tickets) are going up in price to €3.30 and €7.80 respectively for 1-2 zones.

This includes kid’s tickets too, which will continue to be charged a flat fee regardless of zones. The new price for a one way children’s ticket will now be €1.50, as opposed to €1.40.

Lastly, the beloved Kurzstrecke (Short Trip) ticket will also be going up in price by 20 cents to €1.70.

The silver lining is that the price of monthly Isar Cards won’t be going up for most commuters. In fact, all people who currently get monthly Isar Cards do get a better deal from December 15 onwards, as the price for 1-2 zones will stay the same at €55.20, BUT since Rings 1-4 will be merging into one super zone, that same €55.20 allows you to cover more ground.

In a similar way, since there are now far fewer zones than there used to be rings, those who travel longer distances will be paying less for their monthly Isar Cards after the December 15 change as well.

These positive changes will ring true for most weekly Isar Cards as well, apart from the ones cover 1-2 rings, which are currently 15.40. After the change, those who usually get that ticket will be forced into getting a weekly ticket for the entire M-Zone, which will cost 17.10.

Once again, to know how you will be directly impacted, use the MVV Tariff Checker here.

There will be no more 3 day tickets

RIP, one of the best value tickets for visitors! That’s right, from Dec 15 onwards, there will be no more three day tickets, which is a real shame in our opinion…

BUT going to the Munich airport by public transport will be cheaper! ……. Slightly

Very very slightly… like, 10 cents slightly, but that’s better than the prices going up right? Under this new MVV system, Munich Airport will be considered part of Zone 5, which puts the price of a single ticket a whopping 10 cents less than it is currently. Woo! Take 13981284234 trips and you’ll be rich in no time.

Any more questions about the new MVV Munich fare structure?

This post only summarizes our key takeaways and doesn’t cover everything. If you have more questions, check out the official MVV site here.